Collabox celebrated its 20th anniversary in the fall of 2018 and for us it was an important milestone in the history of Collabox.

The evening was therefore organized in the form of a scotch tasting.

Our customers, partners, employees and even those who coded the first lines of Collabox have found each other.

We underlined the contributions of each one in the development of the software and thank our customers for their confidence.

These are great memories!

By Louise Lahaie Our history

In the fall of 2018, Collabox celebrated its 20th anniversary. We organized an evening with our friends and clients to celebrate it.

A scotch tasting with photos from our trip to Scotland.

Thank you to all our loyal partners, customers, family and friends for following us for 20 years.

By Louise Lahaie About the Collabox, Our history

On January 20, 2015, the Collabox team invited its customers to celebrate the 3 million entries in the timesheet module. During this evening, eleven people received personalized buttons to highlight a fact or an anecdote related to  Collabox. 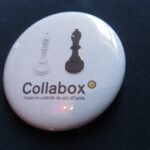 This badge is a nod to the foundation of Masseco, the company that launched Collabox. The two chess pieces therefore symbolize the two founders Claude Cossette and Francis Masse. This association is what formed the name Masseco, a fusion of the two surnames. While being very close to the company when it was founded, Mr. Cossette finally decided not to technically be part of Masseco inc, leaving the company to his friend Francis Masse. 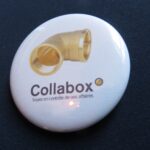 At the time of Collabox’s development, the software was only valid for one company. The president, Francis Masse, wanted the software to work for several companies. At the time, Gabriel Michaud, the company’s first programmer, told him that it was a lot of work. Mr. Masse simply nudged him and said, “Come on! We are going to make software that works for several companies ”. Today, Collabox serves hundreds of companies simultaneously. The “elbow” badge is therefore in memory of this exchange between the president and the programmer. 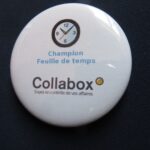 One of the main functions of Collabox is the management of timesheets. Over 3 million time entries have been made since its launch in 1998. The user, Claude Bisson, holds the record for the most hours recorded. With 28,000 hours in Collabox, Mr. Bisson is definitely the timesheet champion. 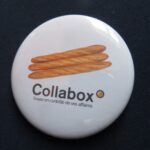 In Collabox, there are several methods for managing your time with timesheets. For his part, Claude Bisson, the timesheet champion, has mastered the art of making long time entries that bring together all his tasks. He therefore received the “baguette de pain” designation for his long blocks of time. Some discussions are underway to determine if Mr. Bisson is really a “Baguette” type, the calculation methods are questioned by some. 😉

In Collabox, there are several methods for managing your time with timesheets. Unlike those who like to make a long entry for several tasks, some people prefer to detail, to the nearest 15 minutes (or even to the nearest 5 or 6 minutes!), Each of their tasks. This is among others the case of Claire Goguen who is the champion of the greatest number of entries in the timesheet. This earned him the mention “sliced bread” for having sliced his entries in the timesheet into very small units. To date, there are nearly 60,000 entries in Collabox!

In 2006, BOOST Consulting Group received a service offer from Masseco for the use of Collabox. They put the project on ice, hence the freezer, for several years. After a long period of reflection, they finally accepted the offer. The nights brought advice to this team which was finally welcomed with open arms to the large family of Collabox users. 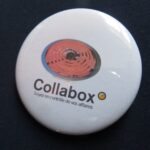 Even though BOOST Consulting Group kept its service offering on the ice for several years, they have become one of Collabox’s hottest clients. Their project is one of the most complete using all the modules offered by Collabox. Thus, 100% of the management of the company is carried out using Collabox. 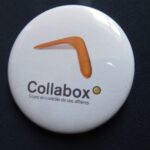 The communication agency Triomphe has been a client of Collabox for several years. One fine morning, a merger and acquisition story, they decided to try another software. A good player, Collabox let him stand on his own feet. They finally returned to Collabox. This is proof that we always return, like a boomerang, to our favorites <3 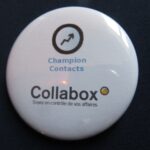 Among Collabox users, several use the possibility of keeping and organizing their contacts. Denis Gobeille pushed the function to its maximum. With more than 100,000 contacts registered in Collabox, it is definitely the user who pushes this function to a whole new level. He is the Collabox Networking Champion. 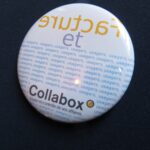 Some Collabox customers have a unique vision of their needs, which is also the case with Location Discount with the billing system. Instead of sending an invoice to be paid, they prefer to receive invoices from the self-employed workers they employ to be able to pay them. No challenge is to the test of our brilliantly successful team of programmers. The badge therefore represents this extraordinary vision of Location Discount but also a nod to their number of users. Indeed, with its 1,095 users, Location Discount is the customer with the most users of all!

Much of Collabox’s work is done online, but when the team needs to get back down to earth, they get involved in their community. The president and founder of Masseco and Collabox, Francis Masse, is also a volunteer for the organization of the little brothers of Quebec. This organization offers people over the age of 75, without family or friends, sweet treats and the joy of living. During the 3 million evening, the guests present raised a little over $ 200 which was given to the organization.